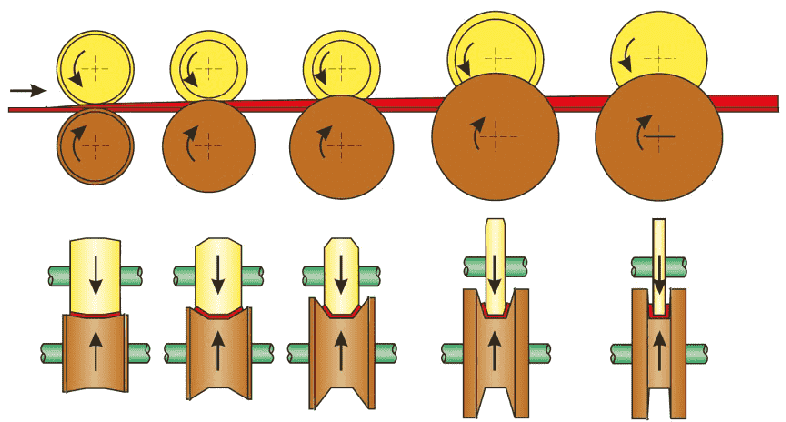 Summary Most of the factors that Couse problems in roll forming machine:

Sometimes entry guide stands in Beginning can cause the twist or camber problem. When you are trying to adjust the straightener, but twisting it back and then trying to eliminate twist but nothing happens? in this case, firstly Check the entry table and make sure the material be perpendicular to the rolls.

Make sure the stand is in good working order (twist can be induced if the stand is allowed to move off one side to the other). If the sides are not aligned properly, use a 24” scale and place half of it on the front or flat face of the first pass. Align the guide parallel to the scale and tighten the stand. This is a quick and easy way to potentially minimize twist.

Excessive Pressure there are on the Inboard or Outboard Side of the Tooling is a common mistake that operators make when they are adjusting the rolls. operators adjust the rollers without material in the machine at first which can lead to twisting, down bow, up the bow, etc.

In order to solve this, gauge the roll form tooling without the material and check the rolls using a mirror to view between each pass. and check rolls are matched properly. Then start the material through the first pass and re-gage the rolls. Set the roll gaps based on the actual material thickness you are running. Then forward the machine about one inch and check the gap, you may need to do this a few times to get the proper gap. Continue this process for the remaining passes.

Matching the roll form rollers should be a procedure during setup. After you have the rolling set up and adjusted to the material thickness, you should make a habit of checking the match between top and bottom rolls. Take a mirror and a sheet of white paper and hold the paper at a slight angle between the rolls  On the other side of the roll, look in the mirror and check the outline of the rolls where the material will be formed. You should have an equal gap around the form and just a small amount (0.005-0.010”) more between the top and bottom rolls.

maybe you don’t believe that the roll forming effect is dependent on lack of lubrication. These days, we are design and manufacturing roll forming machines for very difficult profiles. These profiles can involve multiple material thicknesses and types. At the same time, we are asked to do all of this with one set of rollers. Depending on the rollers’ design, there may be issues with the material fighting drag with the all compression and stretching as it is being formed. Sometimes just a little bit of lubricant works wonders. If the product cannot have lubricant on it, there are many types of vanishing oil that dissipate after the product has been formed.

some of the parameters that determine straightness include : 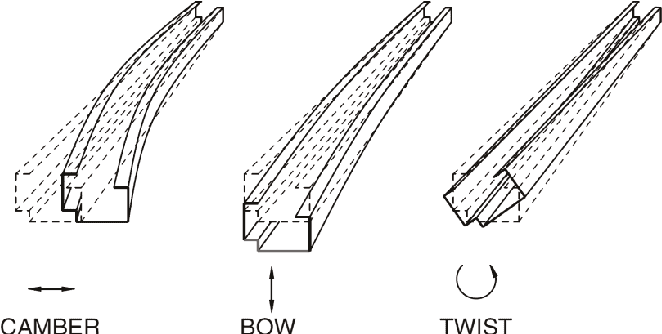 How to Adjust a Roll Former

twist in the roll-formed part is like a corkscrew effect and often caused by excessive forming pressure and asymmetrical profiles. generally, twists can be held to less than 5 degrees in 10 feet or 3 meters

the twist problems usually attributable to during setup mistakes. The twist is the rotation of two sides of the profile directions. there is so important notice” Twist in a formed part is generally the result of excessive forming pressures along the longitudinal radii”.

there is a list of some of the problems about a twist in roll forming machine and  some remedies for the roll form operators:

The vertical plane deviation from a straight line can be cross or longitudinal bow, it is caused by uneven vertical gaps on symmetrical cross-sections and uneven forming areas on asymmetrical sections in the general bow can be held to plus or minus 1/8 inch in 10 feet or 3mm in 3 meters.

Camber is the deviation of a side edge from a straight line measured prior to roll forming. The maximum allowable camber 3/8 of an inch in 10 feet or 9.5 mm in 3 meters. Excessive camber induces curved bow and twists in the finished roll form parts

Sweep or camber is the deviation from a straight line in the horizontal plane of a finished panel along the length.

Edge-waves easily happen in the roll-forming process of thin steel parts, which greatly influences the forming quality. Waves can occur because the distance from the edge to the first bend is too great, or the metal is too thin.

End flare is the change in the cross-sectional profile at the ends (front and rear) of a roll-formed part compared to any other sections along its length.

The end flare of a roll-formed product can be toward or away from the centerline of the section, where the flanges move at the open ends of the part. If lower strength materials are used in roll forming of shallow sections with pre-cut strips, then usually the front end is “flared-in” and the tail end is “flared-out”.

If the number of passes is too few, that is, too much forming is being

done per stand for a given part configuration, flare can result.